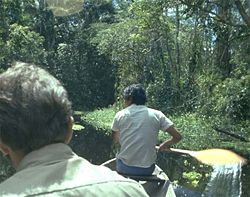 Complex Ecologies like this one in the Amazon jungle contain many niches for survival. The Stock Market is another complex ecology where value is mapped to information. However, the form that niches (ecological or financial) are occupied is not predetermined and efforts to explain what may be random events with narrative is part of the Narrative Fallacy. Photo: Hugh Pickens.

How do you construct a narrative?

Constructing narratives is so ingrained into human behavior that constructing a narrative isn't something we have to work at. Humans are pattern seeking beings and anytime a human is presented with two facts, he will try to connect the facts and unconsiously construct a narrative to explain the connection between the facts.

How do you test for the Narrative Fallacy?

You construct the narrative and you make a prediction.

For the past few days I have been updating the Tucows article on Wikipedia with recent developments over the past six months and I am wondering if I am reading too much into recent events that have occurred. The information I added is all fully documented and cited. But the facts seem to present conclusions that may not be warranted. Here are the paragraphs I have some doubts about:

The Wall Street Journal reported on December 7, 2007 that Platinum Management LLC had reported holding a 5% stake in Tucows, according to a Schedule 13D filed with the U.S. Securities and Exchange Commission.[1] Platinum said that Tucows' public market valuation does not reflect its intrinsic value despite a "strong history of positive cash flow generation and expansion prospects in 2008" and that Tucows has "an extremely attractive recurring revenue business model as a top-three domain name registrar along with several hidden assets that are misunderstood, including its ad business, premium names business and newly launched hosted e-mail business."[1] Mark Nordlicht is the manager and controlling person in Platinum Management.[2] Nordlicht was previously the largest shareholder and chair of Optionable Inc., a commodities brokerage firm.[3] The Toronto Star reported on May 23, 2007 that class-action lawsuits had been filed in the United States alleging that Optionable helped David Lee, the star trader at the Bank of Montreal, mismark options, allowing him to hide millions in losses.[3] The Financial Post reported on May 11, 2007 that Nordlicht sold 7 million shares of Optionable to Nymex for $19 million days before the Bank of Montreal received a strongly worded auditor's report into the activities of its options trading desk prompting the bank to announce it had uncovered natural- gas trading losses valued at between $350-million and $450-million.[4] Optionables shares dropped 88% after announcement of the losses from $7.01 a share to 0.85 after the announcement.[4]

On December 21, 2007 Tucows disclosed that they had retained Investor Relations firm, The MKR Group, to provide investor relations and corporate communications services in the United States.[5] "Over the past year we have made significant progress in strengthening our overall business by improving our wholesale domain name and email services and adding to a now large domain portfolio, thereby positioning the company for greater growth and profitability," said Elliot Noss, President and CEO of Tucows.[5] "As a result, we believe this is the ideal time to articulate the Tucows message to investors. An expanded Investor Relations effort in the US will enable us to better communicate our story to Wall Street, increase the overall awareness of the company, and unlock hidden shareholder value," Elliot added.[5]

Citations for the material under discussion

What is the narrative constructed from these two events?