From Researchandideas
Revision as of 05:46, 27 May 2012 by Pickens (talk | contribs) (→‎A Stranger Arrives: But the townspeople welcome him with kindness and generosity)
(diff) ← Older revision | Latest revision (diff) | Newer revision → (diff)
Jump to navigationJump to search

Picture a frontier town over one hundred years ago, just one year after the territory where it is located becomes a state. The town's population is just over 2,500. The town is only 15 years old and there are only a few brick buildings. The town's street are unpaved, dirt roads that turn to mud when it rains and there are wooden sidewalks and hitching posts for horses pulling wagons in the commercial district. Main street consists of a few hardware stores, barbershops, dry goods stores, a carriage repair shop, a newspaper, and a bank in one of the town's few brick buildings. Residents get their water from a a tank on a water tower in the middle of main street.

A mysterious stranger arrives in town on the train with nothing more than a cloth bag for his clothes and a letter of introduction to the owners of the largest ranch in the county. The stranger is 35 years old and says he is a lawyer from back east and that he has come to the town to prospect for gold - black gold. The stranger is unusually dressed in knickerbockers, a Norfolk jacket, and spats and no one could tell by looking at him that he was living on borrowed money.

But the townspeople welcome him with kindness and generosity and he is able to convince the owner of a local hotel to let him have a room and take his meals on credit. 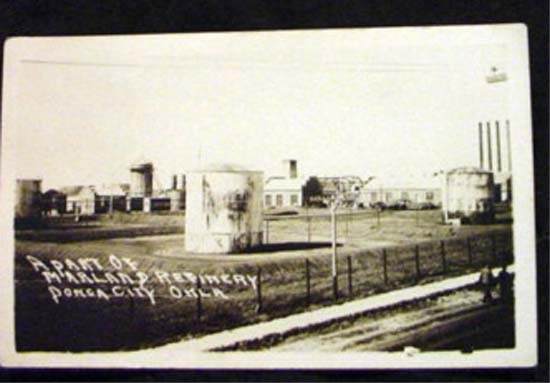