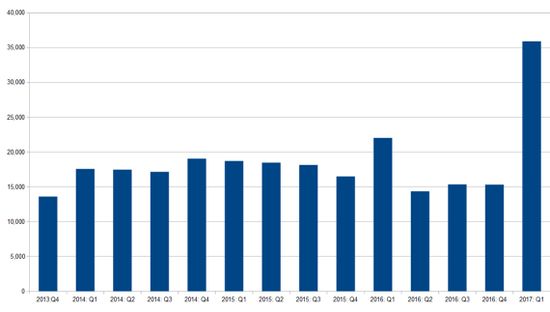 Gross Additional Customers Per Quarter (Click on chart to expand.) Note: In Q1 2017 Ting Mobile migrated over 45,000 RingPlus accounts, 22,000 of which accepted Ting Mobile's terms of service and provided a valid credit card and set up an account. 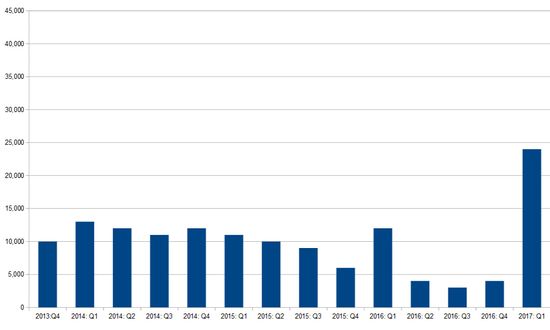 Net Additional Customers Per Quarter (Click on chart to expand.) Note: In Q1 2017 Ting Mobile migrated over 45,000 RingPlus accounts, 22,000 of which accepted Ting Mobile's terms of service and provided a valid credit card and set up an account.

Motley Fool Columnist Andy Gould published his fourth article about Tucows this year on August 4, 2017 and this article is about three key factors Gould says investors should watch when they set expectations for quarterly results that will be discussed in Tucows upcoming Quarterly Report on August 8, 2017.

Gould says in his financial disclosure statement along with the article that he is short August 2017 $55 puts on Tucows. According to one financial analyst who is experienced in trading options, the best way to understand Gould's position is that when you sell a put like the August $55s, you immediately get the premium. According to the analyst the best outcome from that point is that the stock goes and stays about $55, so that at expiration the put expires worthless, your obligation to buy the stock at $55 goes away and the premium you received upon selling the put is all profit.[1]

Here are Gould's three factors to watch for.

If there was a way to post a comment to Mr. Gould's story at the Motley Fool Web Site, I would leave the following post for Mr. Gould.

Hugh Pickens writes: "I am going to disagree with Mr. Gould slightly on this factor. First I think Mr. Gould inadvertently sets up expectations that are too high for subscriber growth in ting mobile. The first quarter was an anomoly. There was a one-time influx of new customers from another MVNO that went broke. If you look at the two charts to the right you will see the "bump" in the first quarter and also see that the actual long term trend in net customer ads is declining. Subscriber growth in 2016 Q2, Q3, and Q4 were all under 5,000. With the new competition in the mobile market, I would be happy if Ting Mobile has 4,000 net ads in the second quarter. There is a good chance it will be lower."


"Looking long term, I really don't see outsize growth for Ting Mobile in the future but if they continue to focus on customer service as their key differentiator, Ting Mobile could be a cash cow for many years to come."

Note: This was the original paragraph 2 in the article.

When you short a put, you take on the obligation to buy shares at the put option strike price. This will occur if the stock is below the put strike price at the expiration of the contract, and it fits with a goal of buying the stock if it were to drop to a target price. Gould says in his financial disclosure statement along with the article that he is short August 2017 $55 puts on Tucows so Gould will make money if TCX goes down. Any TCX stock price below $55 before August 18 makes Mr. Gould money.[3]