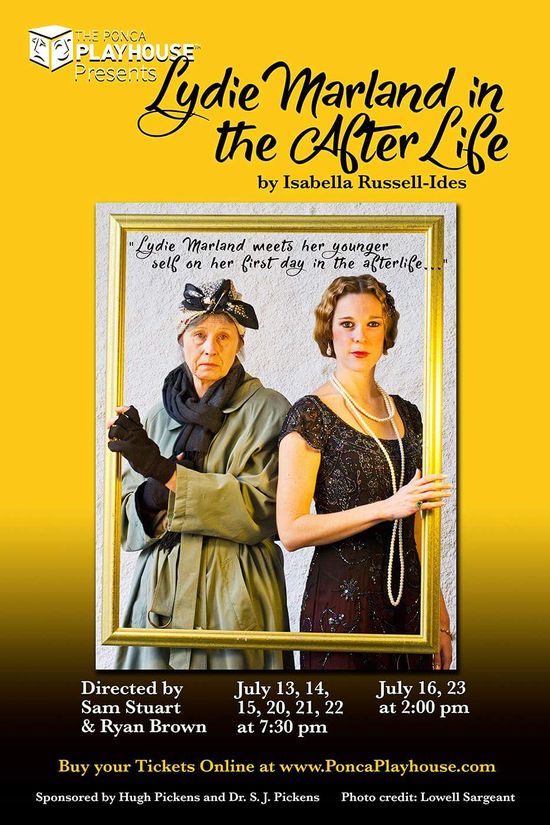 Ponca Playhouse will be presenting the play "Lydie Marland in the Afterlife" this summer as part of the "Oklahoma Pride" series. Ponca Playhouse's production will be the world premier of an expanded version of the original play presented at "The Festival of Independent Theatres" in Dallas, Texas in May, 2013. This expanded version was written especially for production by Ponca Playhouse by playwright Isabella Russell-Ides. The play will be sponsored and produced by Hugh Pickens and Dr. S. J. Pickens.

The play will run on the following dates:

Tickets will go on sale in June at the box office of Ponca Playhouse and will be $20. The box office is open Monday - Friday from 11 am to 3 pm.

Tickets may also be purchased online.

"Lydie Marland in the Afterlife" will be presented at Ponca Playhouse at 301 S 1st St. in Ponca City.

Loosely based on the life of Lydie Marland, as told in the book “The Marland Tragedy,” Lydie was the niece and adopted daughter, then wife of oil magnate and Oklahoma governor, E.W. Marland. Her life was a fairy tale of riches turned Greek tragedy. From wife of one of the wealthiest men in the world to wayward bag lady, she was lost for twenty-two years in the landscape of America.

In the play the lights come up on the heroine returning to consciousness shortly after her death. Lydie had been a vagabond for decades after the economic downfall and death of her oil-baron husband. As she begins to recall her glorious early days, her younger self enters, an apparition in her marcelled hairdo and white frock. The playwright Russell-Ides takes a novel approach to the mystery of what awaits us on the other side and constructs a believable journey that leaves room for hope, redemption, and reflection on a life lived.

Playwright Russell-Ides makes clear that Lydie was no gold-digger. But from the time Lydie (and her teenage brother George) were adopted by their aunt and uncle, Mary Virginia and E. W. Marland, they were treated to extravagance beyond comprehension, after a life of struggle and impoverishment. It’s implied Lydie simply wanted her dazzling, blissful new existence to continue without interruption. Her doting uncle ushered her into a completely different milieu, filled with parties, travel, luxury and pleasure. “Lydie Marland in the Afterlife” makes it easy to understand why she was willing to wed her adoptive dad and uncle.

Russell-Ides’ play, in which the older, dead Lydie confronts her younger self, is a fascinating rumination on choices and tries to answer the question, “'If you could give yourself advice from years of experience, what would you say?” but really it answers, “What would your younger self say back?” And would you even trust old-you?

“Lydie Marland in the Afterlife” is an engrossing, amusing, richly depicted portrait of a woman who was flawed, and just as subject to the cruelties of fate as the rest of us. More than just creating a sympathetic case for Lydie Marland, Isabella Russell-Ides draws us into her exhilarating life, revealing a woman who jumped in headfirst, whether she was on a European spending spree, fox hunt, protest march or cleaning motel bedrooms. Whatever the outcome she embraced the world with sentience and verve.

Russell-Ides got the idea for “Lydie Marland in the Afterlife” eight years ago while she and her husband were returning to Dallas after visiting family in Kansas. “We saw a sign on I-35 advertising the Marland Mansion,” says the playwright. “We visited the mansion and fell in love with its beauty and its history.”

"Russell-Ides said it was the broken marble statue, one made in Lydie’s youth that had been supposedly destroyed before she disappeared, that made her fall in love with the story," says Mary L. Clark. “She called it 'a case of broken identity.'”

In a first for Ponca Playhouse, the play will have two directors, Sam Stuart and Ryan Brown, who will each direct their own separate cast of two actresses. Auditions will be coming up on Monday, May 8 and Tuesday, May 9 at 730 pm at the Playhouse. We will be looking for two women for each cast for a total of four women. "Young Lydie" will be an actress about 17 - 26 years old. "Old Lydie" will be an actress who will be made up to look 87 years old and then 50 years old. The Playhouse will present the separate casts on alternating days of performance.