I Refuse to Be Lonely 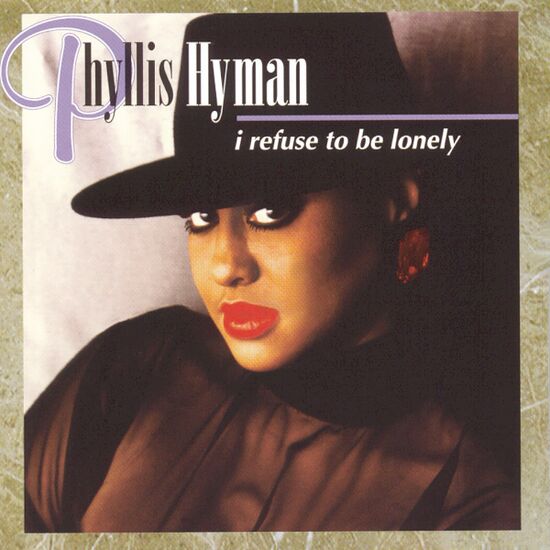 I Refuse to Be Lonely: Phyllis Hyman's Last Album

On the afternoon of June 30, 1995, six days before her 46th birthday, Hyman died by suicide by overdosing on a mixture of Tuinal and vodka in the bedroom of her New York City apartment at 211 West 56th Street. She was found unconscious at 2:00 p.m. (EDT) and died at 3:50 p.m. at St. Luke's-Roosevelt Hospital (now Mount Sinai West) hours before she was scheduled to perform at the Apollo Theater. Her suicide note read in part:

I'm tired. I'm tired. Those of you that I love know who you are. May God bless you.

Hyman suffered from bipolar disorder and depression for years, having been diagnosed in the 1980s. She often self-medicated with alcohol and drugs, and frequently spoke about suicide.

It is virtually impossible to listen to "I Refuse to Be Lonely" released five months after Phyllis Hyman's suicide, "without realizing that many of these songs more than faintly hint at the tragedy that was brewing" according to Jose F. Promis. "All of this is only heightened by the last song, prophetically titled 'Give Me One Good Reason to Stay,' where Hyman sings 'It's true I'm leaving/My bags are at the door.'"[1]

"Never has an artist produced an entire album that reflects so hauntingly on her life and hints so broadly of her imminent demise as does Phyllis Hyman's "I Refuse To Be Lonely," wrote Jonathan Takiff in the Chicago Tribune. "Begun at the end of 1993 and completed just days before her death by suicide on June 30, 1995, this goose-bump evoking, emotional roller coaster of a soul-pop ballad album comes off thematically as a life and death struggle, and artistically as one heck of a swan song."[2]

"She was passionate about not singing anything superficial," said song collaborator Gordon Chambers. "In retrospect, a lot of what we wrote were her parting words. It's almost chilling to hear `Why Not Me?' because it really is her testimony."[3]

Creatively as well as emotionally, "I Refuse To Be Lonely" serves as an ultimate career capper writes Takiff. "Goaded by producers Nick Martinelli and Kenny Gamble, the set offers this jazz-inflected singer's best-ever vocal performances and strongest creative input, including five songwriting credits and unbilled assists on a lot of others."[4]

"Phyllis would sit down with the songwriters and tell them what she was thinking, and they'd translate the thoughts into song lyrics.So the entire album reflected her point of view," says Gracia. "Phyllis was an advocate of suicide," Gracia added. "I was not surprised or shocked that she took her life. It was her philosophy that she was in charge of her body because it was hers, and in charge of her life because it was hers. Her position was, if she didn't like the pain, didn't like her life, she had the right to get out of the pain."[5]

Hyman began working on the album during an emotionally difficult period writes Esther Iverem in the Washington Post. In May 1993, within a period of 28 days, her mother, Louise Hyman, her grandmother and a close friend all died. "She was crying a lot," says Nick Martinelli, the Los Angeles-based producer who helped write the single "I Refuse to Be Lonely" and produced four other cuts on the album. "Her mother had just died, and we wrote about what she was feeling at the time. She really felt alone.[6]

Brimming with painful lyrics, the album attests to Hyman's intense emotional and, ultimately, life-and-death struggle writes Iverem. "Hyman claws back from the brink, back from the place where she fought depression, loneliness, alcoholism, obesity and a consuming anger at lesser voices enjoying more commercial success. She ultimately returned there in June, overdosing on sleeping pills six days before her 46th birthday."[7]

"Phyllis was uncovering the riddles of stuff in her life," says Glenda Gracia, Hyman's friend and manager for 14 years. "She was in touch with her emotions. Sometimes when you start that process, the demons that you confront may have more for you than you might have thought you would find.[8]

"Phyllis loved drama" says Gracia. ""Let's face it, she was on her way to a show the night she died. She had a performance to do at the Apollo Theater. I won't say she didn't intend to make a statement. She absolutely felt this record was her best. Clearly her timing was dramatic."[9]

Rare for a celebrity, Hyman made public declarations of her loneliness and desire for a love in her life writes Iverem. "A 6-foot-1 beauty, she had difficulty finding men who had the right combination of stature, income, intellect and personality. Friends say she felt she intimidated and overpowered men. She also didn't want married men or want to share a man with other girlfriends."[10]

Dr. Pickens and Hugh Pickens celebrated 33 years of marriage before Dr. Pickens passed away in 2017.

Hugh Pickens (Po-Hi '67) is a physicist who has explored for oil in the Amazon jungle, commissioned microwave communications systems across the empty quarter of Saudi Arabia, and built satellite control stations for Goddard Space Flight Center in Australia, Antarctica, Guam, and other locations around the world. Retired in 1999, Pickens and his wife of 33 years moved from Baltimore back to his hometown of Ponca City, Oklahoma in 2005 where he cultivates his square foot garden, mows seven acres of lawn, writes about local history, photographs events at the Poncan Theatre, produces the annual Oklahoma Pride series with his wife at Ponca Playhouse, and recently sponsored the first formal dinner in the Marland Mansion in 75 years. Pickens is founder and Executive Director of Pickens Art Museum with locations at Northern Oklahoma College in Tonkawa, Oklahoma, City Central in Ponca City, and Pickens Gallery at Woolaroc. Pickens can be contacted at hughpickens@gmail.com. Pickens is a covid survivor and a stroke survivor.

I have a degree in physics from SUNY in 1970 and have worked in science and technology my entire career. I have held such jobs as Geophysical Observer on a geological survey crew in the amazon jungle, running a portable hydrocarbon detection laboratory on an oil rig, systems engineer for the microwave communications system and supervisory control system on the 800-mile long Trans-Andean Pipeline, independent contractor to Collins Radio in 1979 installing, commissioning, and testing microwave repeater stations all over Saudi Arabia, military advisor to the Royal Saudi Navy on naval communications, navigation, and fire control systems (1980 - 84), project engineer, then project manager for Bendix Fields Engineering (later becoming AlliedSignal Technical Services, then Honeywell Technical Services) from 1984 until my retirement in 1999.