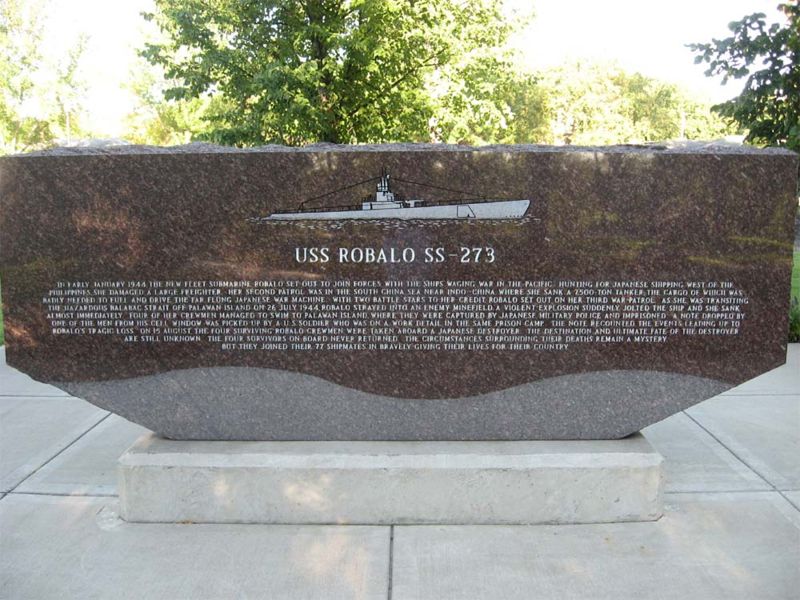 The memorial to the USS Robalo in Fargo, North Dakota. “USS Robalo SS – 273. In early January 1944, the new fleet submarine Robalo set out to join forces with the ships raging war in the Pacific. Hunting for Japanese shipping west of the Philippines, she damaged a large freighter. Her second patrol was in the South China Sea near Indo-China, where she sank a 7,500 ton tanker, the cargo of which was badly needed to fuel and drive the far flung Japanese war machine. With two battle stars to her credit, Robalo set out on her third war patrol. As she was transiting the hazardous Balabac Strait off Palawan Island on 26 July 1944, Robalo strayed into an enemy minefield. A violent explosion suddenly jolted the ship and she sank almost immediately. Four of her crewmen managed to swim to Palawan Island where they were captured by Japanese military police and imprisoned. A note dropped by one of the men in his cell window was picked up by a US soldier who was on a work detail in the same prison camp. The note recounted the events leading up to Robalo’s tragic loss. On 15 August, the four surviving Robalo crewmen were taken aboard a Japanese destroyer. The destination and ultimate fate of the destroyer are still unknown. The four survivors on board never returned. The circumstances surrounding their deaths remain a mystery, but they joined their 77 shipmates in bravely giving their lives for their country.”[2]