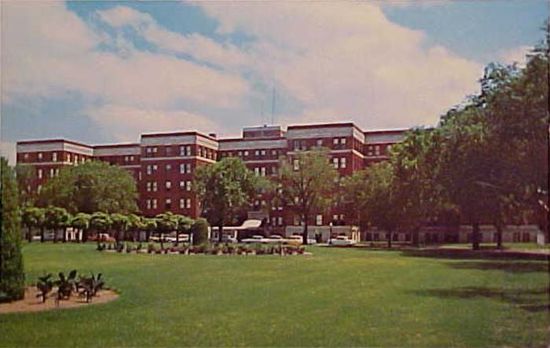 Conoco headquarters at Ponca City at about the time Johnny, Dick, and Jerry made their canoe trip through Ponca City.

In July 1949 Ponca City was host to an unusual group of travelers as Johnny, Dick, and Jerry made their way on a 3,000 miles trek by canoe across six states down the Arkansas River from Denver. Colorado to New Orleans, Louisiana.

Start of the Trip

The idea of the river trip germinated in a Denver bar one December evening in 1948. Conversation rolled around to summer and the end of the ski season. Since they couldn’t ski in the summer, Johnny insisted they would need something else to keep them busy. Why not take a trip? Why not go to New Orleans? In fact, why not paddle all the way there on the Arkansas River? Just because no one else had done it didn’t mean they couldn’t. But when they told family and friends they wanted to canoe down the Arkansas, everyone said it was impossible. Of course, that made these three young men all the more determined to try.

More than anything else, the three veterans were restless. They had been to war and come home safe but shaken. Dick and Johnny had faced the bitter cold of Korea. Johnny’s nightmares focused on the tractors making the rounds each morning to scoop up the frozen bodies of men, women, and children who had died overnight. On the rare occasions he talked about the war, Johnny revealed his fear of walking to the latrine at night with his gun cocked and ready. When the three young men returned, it was hard to settle in to ordinary life in the States. After leading a company of men, Sergeant John Evert found sitting in a college classroom increasingly difficult. Even though the freshmen were only three or four years younger than he was, they seemed so naive. “They were children, really,” he said. So the friends, Johnny, Dick, and Jerry grumbled over their beers and dreamed of something grander. Then they went beyond the dream.

“Some guys spend their whole lives dreaming,” Johnny said. “We decided to do something.”

Johnny, Dick, and Jerry weren’t worried by the wild state of the Arkansas River. With aerial maps as their primary guides, and more enthusiasm than experience in a canoe, they thought paddling just such a river would be the perfect challenge. Taking off on a trek some 2,000 or 3,000 miles across six states takes a special kind of courage, or as Johnny said, “a certain kind of crazy.” At the very least, such a journey requires a spirit of adventure not often found in any age.

On July 2, 1949 the men arrive at Ponca City, at that time a thriving town of 20,180 and headquarters to Continental Oil Company. Johnny found the people of Ponca City very friendly and welcoming. As eager to greet them as Arkansas City had been, the people of Ponca City were even more excited. The travelers planned to get to Ponca City by evening of July 1st, but that proved to be too ambitious. Worried by the delay, the Ponca City CAS station sent out a plane to find them. When the pilot spotted their camp, he wobbled the plane’s wings to ask when they would arrive. In the days before cell phones and instant communication, writing in the sand worked just as well to let the citizens of Ponca City know when to expect the canoes.

Woke at 5 AM. Broke camp at 5:45 and headed for Ponca City. Had a slow current. At 12:00 we stopped for lunch and a short swim. We just got out and Jerry and I dressed when an airplane buzzed us. John grabbed a poncho and wrapped himself up in it. We wrote in the sand that we would arrive in Ponca City at 1:00 pm and were only 7 minutes late. We were met by the Police Chief and the President of the Chamber of Commerce and some reporters. We ate steak at 1:30 and looked over the town and went swimming at the Conoco Refinery Gymn a most Beautiful building. We got out of the pool so late that we decided to see a movie in town and not shove off till morning. We saw Dear To My Heart (for free) and then met my reporter friend and went to the news office to get the first paper that came off the presses for Sunday morning. Oh yes- they even blew the siren in the police car when they drove us through town. Went to bed at 12:00.

Normally they really enjoyed having the airplanes buzz them. Back in Colorado, one plane had followed them for two days, but clearly this time they weren’t expecting the pilot to surprise them skinny dipping.

After the impromptu parade with dozens of people greeting them and celebrating their arrival, Bob Dellinger of the local newspaper showed them the highlights. Prominent townsfolk were more than generous in offering the travelers their hospitality. Continental Oil Co. along with Chamber of Commerce president Frank Overstreet and member H. L. Schall, opened the gleaming Conoco Refinery Pool for them. Johnny later recalled that they were the only people swimming at the pool that day and had the whole, huge pool to themselves. All three were excellent swimmers and spent much of the time in the pool racing underwater. Tall and lean, Dick tanned evenly. Jerry was very blond and perpetually sunburned, especially his face. Johnny was tanned as brown as an oak. With his dark, curly hair and deep tan, he was a dark as any Black man he met.

After a complimentary steak dinner with their hosts from the chamber of commerce, Dick, Jerry, and Johnny went as guests of the management to the movies at the Poncan theater. They spent the night in a room in the Jens-Marie Hotel as guests of the hotel owner, J. J. Young, and spoke to the reporters the next day. Though they had fallen into a routine of paddling, swimming, camping, and greeting people, the young men talked about how much variety there was in river travel. No two days were alike, each bringing its own surprises and challenges.

The heat started to really sap their energy here. The further south they went, and the hotter it got, the harder it was to paddle in the mid-day sun. They tried getting up early and resting or swimming in the hottest part of the afternoon, They also tried paddling at night but Dick hit a tree and nearly wrecked the canoe on some rocks, so they tied up after dark each night to camp on sandbars. During the day, biting flies troubled them. At night, mosquitoes whined in their ears and feasted on exposed skin while the river meandered lazily through cornfields and pastures. But slow travel and bothersome insects were not the only problem.

About 8:30 this morning as we were packing to leave town we discovered that our two 22. Cal rifles were missing. We called the police at once and tried to trace them. Stolen in Wichita we believe. Left town at 9:15 and made a good run but got nowhere. The river winds too much. We were tired so tried drifting. It doesn’t work. Made camp at 7:00 above Ralston and to bed.

This has been part of their story, gleaned from the letters Dick and Johnny sent home, newspapers and radio programs chronicling the trip, photographs and 8 mm movies, and a diary they wrote along the way. Smudged and faded over the years, the diary was written in pencil in a small, black, ringed notebook, a little more than 3 1/2” by 5”. All three men added to the diary, often while sitting besidea campfire on a remote sandbar. In the six decades since the journal was written, several pages from the beginning of the diary have been lost. Exposure to wet conditions has made some words throughout the diary illegible. In spite of these difficulties, the diary provides an interesting, ongoing perspective of the trip as it unfolded. Numerous conversations with John Evert have clarified difficult passages and added additional details.