Difference between revisions of "''My Life In Review: Have I Been Lucky of What?''" 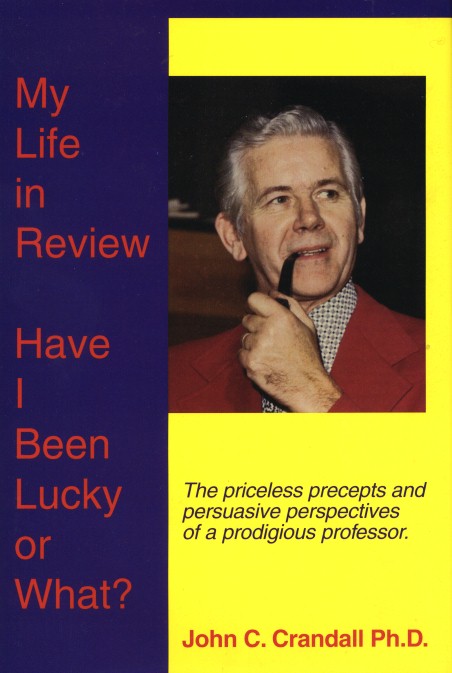 When I began to contemplate writing a Life Review my first inclination was to start with an introduction or preface justifying or rationalizing the palpably egocentric venture. I did recognize that one of my writing foibles is a propensity for protracted preambles and prolonged prolegomena—as well as my addiction to alliteration. Thus, before setting pen to paper I grappled with the problem of defending the undertaking but failed to resolve them to my satisfaction. The result? protracted procrastination. The product? a blank page.

Then, at the end of the first week in May, 1991, I delivered a pinch-hit lecture for Candy on the Late Adulthood topic in her Life Span course. In reviewing her lecture notes I once again confronted the recommendation of gerontologists that persons in that ultimate stage should engage in the healthy and productive exercise of composing a Life Review. The day after that class I sat down at my desk, punched out the word "Ancestry" in capital letters and started to write, not a preface but a simple statement expressing my views on genealogy and presenting some scraps of information I had about my remote progenitors. That didn't take long but it tapped my memory bank and generated a momentum which has carried me through five months of nearly daily sessions at the desk devoted to developing a chronological narrative of my remembered experiences.

I have been amazed at the chain reaction of memories triggered by concentrating my thoughts on a particular period. The old memory bank spewed out a spate of specific mental pictures which had not surfaced for years. My task became a matter of composing verbal descriptions of those images and events. I have access to a few documentary references: Clotilde Blowers' Wilson-Willson and Allied Lines; A Rand McNally Atlas; The World Almanac; Admiral Dan Barby's MacArthur's Amphibious Navy; The Capstan, Yearbook of Notre Dame's Midshipman's School; The Boulder, Houghton College's Yearbooks 1935-1939; My Administrative Files; Collections of my Speeches and Essays; Jill's Journals of Our London sojourn; My Journal of our European Trip and scattered memorabilia—but the overwhelming bulk of material came straight out of my memory bank.

The central question: how reliable are those memories? Certainly they are inevitably selective and are not flawless. I discovered in consultation with Jill some inaccurate dates and mixed-up sequences of events which I have corrected but there must be other inaccuracies. All I can claim is that I have tried to be faithful to the images that have bubbled up into my consciousness. I have not "made up" events or invented situations. In some cases where I have used direct quotations I can't swear that they are exactly verbatim but they do carry the original sentiments expressed as I remember them.

This then is not a documentary history or a strictly scholarly autobiography but a verbal trip down Jack Crandall's memory lane. It is a chronological narrative of my experiences as I perceive them now. It inevitably contains embellishments which stem from the fact that it is an egocentric enterprise and, at times, an urge to be "literary" if not always literal. I have not written fiction. The characterization of persons living or dead applies to real persons and is not coincidental.

If it seems to accentuate the positive it's because there are so many positive things to accentuate. As my writing progressed I began to think that an appropriately accurate subtitle should be "A Series of Fortuitous Developments." Last summer, while conversing with Jill's nephew, Chris Carlson, I told him that this exercise was making me realize how blessed I have been. He startled me by saying, "Would you say that you've lived a charmed life?" (his tone indicated that he thought so). I cannot avoid an affirmative answer to that question.

However, as I have pointed out in the concluding paragraphs of the narrative, to attribute the many good breaks I have had to "luck," "fortuitousness" or "accident" would be to ignore the purposeful impact of my family and friends. I may have been—I was—lucky that Jill came to Houghton College and that I was able to convince her to tie her life to mine but that is not to discount all of the things she has done to make my life happy, yes, and successful. Similarly I was lucky to be the beneficiary of caring and competent parents, ideal in-laws, wonderful daughters, sons-in-law, and grandchildren but their contributions to my well-being and pleasure have not been accidental. The same is true of my friends Wayne Dedman, Harold Rakov, Gordon Allen, Mike Auleta, Harry Porter, Lowell Fox, Al Brown, Roger Carlson, Jim Ditzler, Dick Johnson, Jim Murray, Dick Ingraham, Wayne Herrick, Bill Vogan, Frank Dunlap, Ed Neveu, Don Wilsher et. al. I am not so much a product of a concatenation of coincidences as a beneficiary of the caring efforts of family and friends. Writing these memoirs has raised that realization to a new level of consciousness.

The conventional point to make in one's memoirs' preface is that they are written to share one's experiences with his descendants to let them know about events in his life that they would otherwise not be aware of and, at some future date they might be interested in having a more complete picture of one of their progenitors than would ordinarily be passed down in the family's oral tradition. That certainly constitutes one of the purposes in grinding out this narrative. In fact, at the outset, it stood out as the principal reason for committing my memories to the typewritten page.

However, as the writing progressed I began to realize that this exercise held intrinsic benefits and values for the writer whether or not anyone else—children, grandchildren, et. al. ever perused these typewritten pages. Such a realization squares with the claims of certain gerontologists who contend that a Life Review has a therapeutic value. I tend to shrink from the notion of equating this activity with therapy since I feel compelled to deny a felt need for therapeutic treatment. Nevertheless I must admit from traveling down memory lane a positive effect on my self-perception, an effect that can best be described as a paradoxical combination of a greater sense of humility and pride, augmented by a sharpened sense of gratitude for the many blessings I have received from family and friends.

As the narrative unfolded and the recounting of events moved along I found much that was satisfying and pleasant to recall, little to regret. I realize that that statement smacks of smugness, but I hasten to add that I do not regard myself as the author of the fulfillments, the happiness and successes that have marked my life. With a different set of families and friends it could have been quite otherwise.

I close this protracted preface by registering the hope that some of my descendants will get some fraction of the pleasure in reading about my life that I have enjoyed in living it—and writing about it.